The Illusion of Renewable Energy and Green Growth

I can’t keep quiet about this anymore.

I have enormous respect for the courage, commitment and sincerity of climate activists – including XR and Just Stop Oil. I have taken part in some of these actions, and I’m grateful for the way they have raised awareness and shifted the Overton Window.

But these movements, together with the big green NGO’s have focused the narrative in a way that is overly simplistic: “We just need to get off fossil fuels, and then we’ll halt dangerous climate change, and everything will be OK”. This, in my view is NOT truth-telling.

Here’s my attempt to explain why I think this.

When I first woke up to the severity of our climate predicament five years ago, I immersed myself in intensive research for months.  Initially, I was pretty focused on the need to reduce emissions from greenhouse gases, in alter to slow down or halt global warming.

As I learned more, my perspective began to change.  I quickly learned that the underlying cause of all our problems is Overshoot – brought about by our love affair with infinite growth.

All the others are consequences of that – such as pandemics, desertification, ocean acidification, deforestation, vulnerability of global supply chains, wars, the collapse of eco-systems and bio-diversity – as well as increasing social injustice and inequality.

We have overshot our carrying capacity.  (And by the way, the more than 100 civilisations that have preceded this one all did the same thing.)

I then began to see how all the challenges we face are inter-connected – even Putin’s invasion of Ukraine is about (at least to a large extent) a resource-grab for their large mineral deposits, as well as food supplies.

If you do some digging, you’ll find that there has been massive growth in renewables over the past few years. At least so far, this hasn’t been replacing fossil fuels – it has simply added to the amount of energy we consume. This is known as the Jevons Paradox.  As an analogy, think what happens when you add another lane to a motorway.  This tends not to make traffic more manageable – it simply creates more traffic.

Watch this TED Talk about the blind spots of the global energy transition from just a few months ago, from the perspective of an expert on geo-politics: https://www.youtube.com/watch?v=za6dE5JrNB0 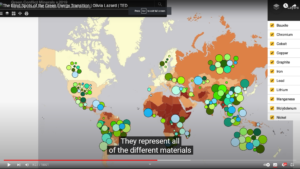 This picture shows all the minerals we need to decarbonise, and their location, and deposit size. As it happens, most of the minerals are located in countries that rank high on ‘corruption indices’, and many are considered fragile states.

Simply switching from one energy source to another isn’t going to fix much until and unless we fundamentally change the system.  Alter the paradigm.

Don’t get me wrong – we must stop emitting greenhouse gases!

But are we just swapping our dependence on petro-states to dependence on China, which dominates the mineral processing globally, and those countries that dominate mineral extraction? This threatens not just international security, but planetary security.

It’s like a perfect storm in the making.  Corruption, institutional and socio-economic fragility, climate disruptions and environmental plundering – all acting as a backdrop to a race to gain access to the minerals that we need in order to decarbonise!

And let’s also throw into the mix something that doesn’t get talked about nearly enough – ‘global dimming’ or the ‘aerosol masking effect’. Many scientists estimate that as we reduce greenhouse gas emissions, a global average increase in temperature of circa 1 degree will happen – and happen super-fast.  Professor Ye Tao has shown through his data-gathering what happened even during the fairly modest fall in emissions that happened during the Covid lockdowns.

Humans are clever and resourceful certainly. But we have a tendency as a species to solve problems through innovation and technology, and it’s been well-researched that when our cleverness ‘works’ in solving the original problem – it very often ends up creating another problem somewhere else.  This is especially true in capitalist systems where there are huge rewards on offer for those who solve the problems first, with all the perverse incentives and externalities that go along with that.  We have not been, at least historically, good at systems thinking, or being rigorous about considering the downsides outside our own product, innovation or niche. See Daniel Schmachtenberger’s Consilience Project for more on this. https://consilienceproject.org/

Watch this clip from a conversation I had with Shaun Chamberlin a few months ago: (168) Renewables may be part of the solution but won’t save us without radical systemic change – YouTube

“Imagine if we suddenly found a truly ‘clean’ energy source tomorrow.  Does it suddenly look like this beautiful world full of justice, sustainability and hope?  No, it just allows us to grow faster, destroy habitats more quickly, and continues to devour everything in support of human existence.”

So what am I suggesting? I’m not pretending to have ‘the answer’.

This is not a problem that can be solved – this is a complex predicament. I’m fairly sure part of the answer is changing our economic model to one that is circular.

Another part of the answer has to be raising awareness about the complexity, and collaborating to design a better way of doing things geo-politically.

We certainly need to up our game in terms of the way politicians and corporations and the media are incentivised, and the kinds of people we choose to lead us. To prioritise wisdom and systems-thinking, rather than short-term populism.

Another piece of the jigsaw seems to be to accept that the future will be much more hyper-local, and will require much more resilient local communities that become skilled in local adaptation, which is where I focus most of my time with HEART Community Group. https://heartcommunitygroup.org/

And of course, there’s a huge need for a shift in consciousness – a spiritual and psychological shift in our stories about who we are, and what a good life looks, sounds and feels like. My efforts feel tiny and completely inadequate – yet wholly meaningful.